With the coming of 2k17, every die-hard Nuggets fan right around the corner knows what it is like to play with them, and now we will be predicting what will be like in this very famous 2k basketball games. 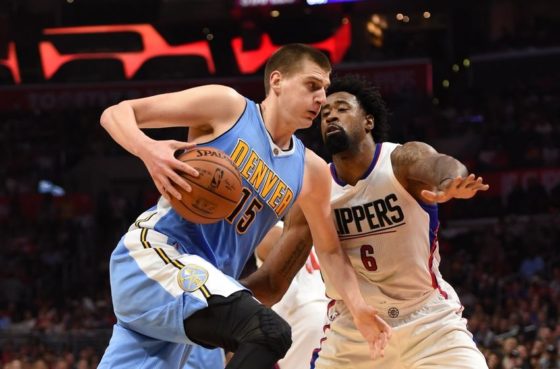 In households all across the world, basketball junkies go head-to-head against their homeboys to prove who has the better game. 20 years ago, players would have to prove themselves only on their local blacktop. Now, in 2016, fans must possess a strong game with a controller in their hands just as much as on the court.

Every new NBA season now brings with it the latest release of the 2K juggernaut series, and with the 2015/16 series now in the record books, it’s time to predict what our Denver Nuggets player ratings will be heading into the 2016/17 NBA season. 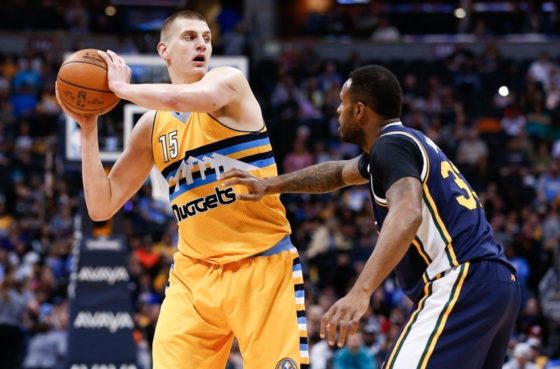 Coming into his rookie season, Jokic possessed a 68 overall rating. The Serbian went on to finish third in ROY voting and became arguably the brightest spot for the Nuggets during the 2015/16 season. His incredible play was reflected in his rating, increasing by 9 overall, a substantial amount by anyone’s standards. With Nikola winning the MVP award at the FIBA Olympic Qualifying Tournament, and an appearance at the Olympics coming up expect Jokic’s rating to continue to trend upward. Jokic will be the highest rated Nugget in the game. 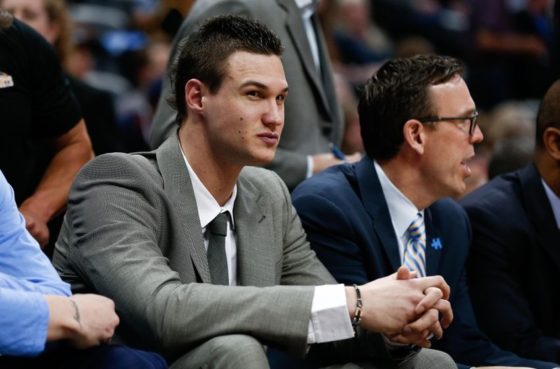 Gallinari began the 2015/16 season with an overall rating of 76, before an impressive first half of the season saw his rating inflate by 5 to 81. Gallo became the undisputed veteran leader of the squad, posting 19.5 points per game and 5.3 rebounds per game on 41% shooting before his season was cut short at 53 games due to an ankle injury. With Gallo now a year older, and coming off a serious injury again, the people at 2K may feel his play may be slightly lower than the last time he took the court, hence the slight dip in his rating. 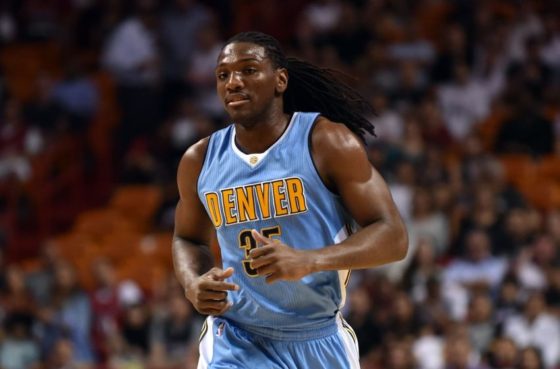 Faried is coming off another solid campaign in the 2015/16 season, posting 12.5 points per game and 8.7 rebounds per game. Kenneth remains a consistent and productive member of the Nuggets, and his rating reflects as much. At this point in Faried’s career, we know what kind of player he is. Over the last three 2K games, his rating has always been between 79-81. With Kenneth set to remain in the same role as the Nuggets starting power forward, similar numbers should follow. 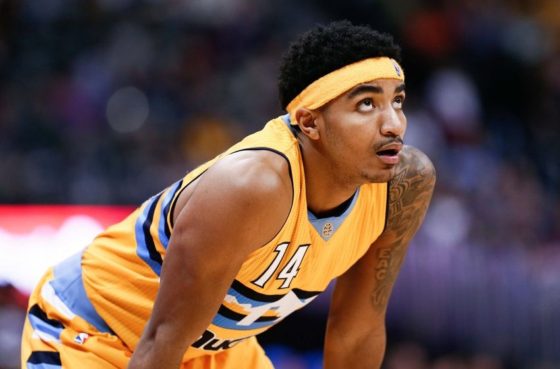 Harris’ rookie campaign was hampered with a terrible shooting slump that saw him shoot just 20% from three, and 30% overall. That season, he was rated 65 overall in NBA2K. Last season, Harris broke the slump and went on to shoot an above average 46% from the field, including 35% from three. These numbers helped Gary increase his rating to a respectable 76 overall. Coming into his third season in the league, Harris will continue to improve, expanding his game and becoming more and more comfortable in the NBA. The addition of Jamal Murray should allow for more open shots for Harris, too. By the end of the season, Gary may find himself with a 2K rating into the 80’s. 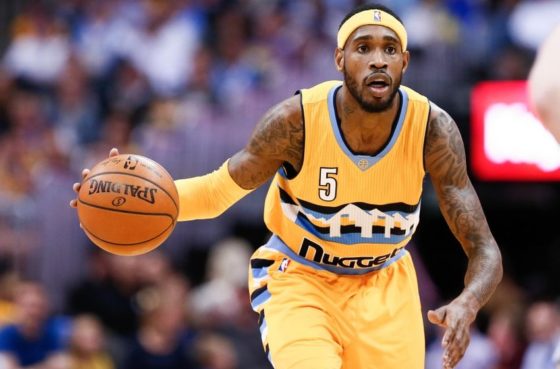 Just three seasons ago, Will Barton carried an abysmal 58 overall rating. At the conclusion of the 2015/16 season however, Barton was the third highest member of the Denver Nuggets, behind only Gallinari and Faried. Barton’s name was being thrown around as a potential 6th man of the year candidate, and his rating of 79 is one of the strongest among all bench players in the NBA. Moving forward, with the additions of Jamal Murray, Malik Beasley and the return of Wilson Chandler, it will be interesting how Barton’s role on the squad will differ from last season. For now though, his rating remains at an all-time high. 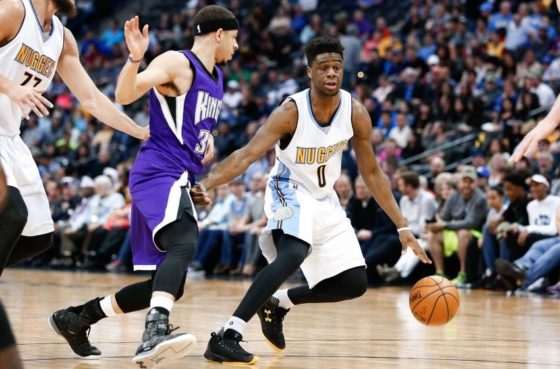 Emmanuel finished the season a much more confident and productive player than when he started. Post All-Star break, Mudiay increased his points per game average from 11.4 to 14.9. He also went from shooting 34% to 39% from the field, while cutting down his turnover count. Across the board, Mudiay improved his statistics considerably post All-Star break, and he was much more adept at running Coach Malone’s offence. While I predict Mudiay to start the season at 78 overall, if he continues to trend upward at the pace he showed at the end of last season, he could also see his rating push into the 80’s. 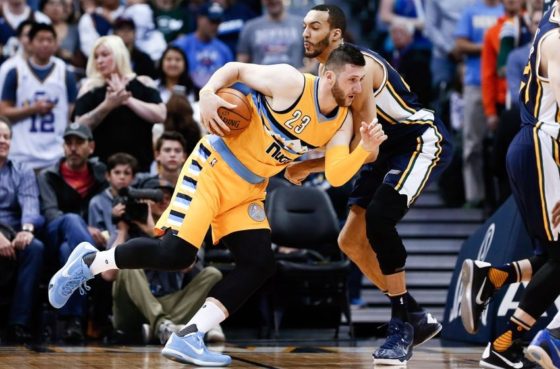 The Bosnian Beast was limited to just 32 games last season due to injury, and in the process, lost his starting spot to Nikola Jokic. On the surface that sounds like a bad year, but Nurkic settled into his role as back up center as the season came to a close. Post All-Star break, Nurkic upped his points per game averaged from 6.5 to 10.2, while also averaging 5.9 rebounds after February. Coming into the season, Nurkic will be in the best shape of his life. He has been working very closely with Nuggets strength trainer Steve Hess, and he has lost a considerable amount of weight- 35 pounds to be exact. With a full season to work with, Jusuf could be one of the most improved players in the league next season. For now though, his rating starts as a slight upgrade over last season. 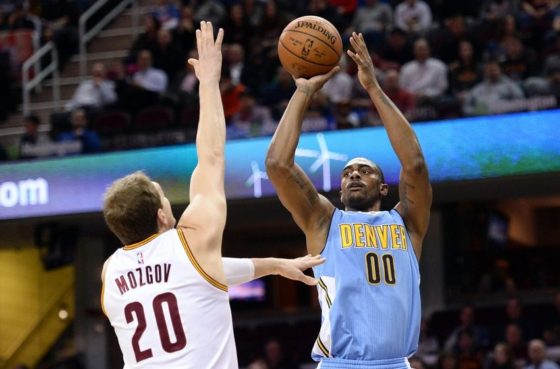 DA is arguably the Nuggets most important defensive player, and them resigning him to a steal of a deal was both an absolute phenomenon and a major show of faith in the future of the Nuggets by Arthur himself. At the age of 28, Arthur is already a veteran of the league. He has remained consistently solid throughout his entire career. While Arthur will never be the star of a team, he is an exceptionally important role player. He has the ability to stretch the floor with his shot making ability, and he is always reliable on the defensive end. Arthur’s 2K rating is an accurate representation of what he brings to the Nuggets and where he sits in the league. 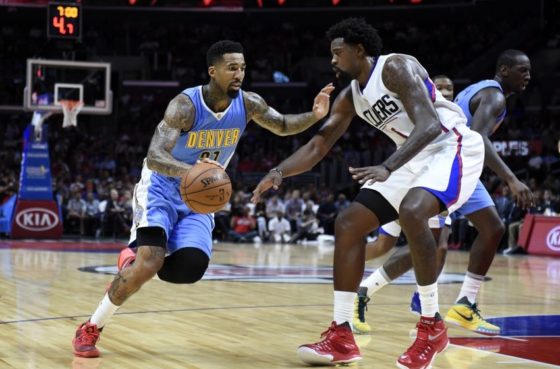 The forgotten man in Denver, Wilson Chandler’s return to action may be the push the Nuggets need to finally make the playoffs. Chandler is an incredibly flexible player, and he is able to play as a small-ball power forward as well as an over sized two-guard. Coming off of major hip surgery that saw him miss the entire 2015/16 season, the people at 2K may feel inclined to lower his rating to begin the season. During his last full season, 2014/15, Wilson’s rating sat at 78 overall. It wouldn’t surprise anyone if, by the end of the upcoming season, his rating was back to that mark, or even higher. 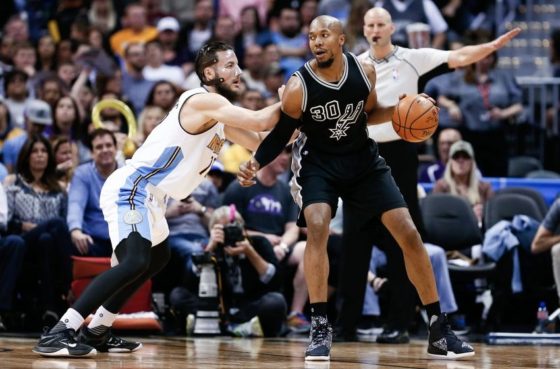 King Joffrey improved statistically across the board during his sophomore campaign in the league, however he struggled to remain in Coach Malone’s rotation at times. When he was on the floor, Lauvergne posted averages of 7.9pts to go along with 4.9rbs. Lauvergne will be a part of the French National Team that will head to Rio for the Olympics next month, and solid play during that tournament could convince 2K to bump up his overall rating slightly. The key for Joffrey moving forward however, is to stay in the rotation. If he does that, he will continue to improve and thus, see an increase in his overall rating. 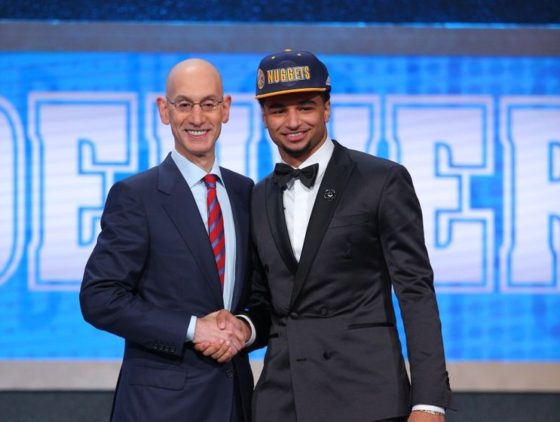 It’s always difficult assigning a ranking to a player that has never played in an NBA game. You simply don’t know where they will place on the NBA pecking order. However, 75 overall seems a good fit for Murray. Emmanuel Mudiay and Murray were both the 7th overall selection in their respective drafts. Mudiay began his rookie season with an overall of 75, so it seems fitting Murray should too. Unlike Mudiay though, Jamal Murray will have to fight for playing time during his first season in the league. The high scoring guard out of Kentucky will have to make the most of his opportunities. 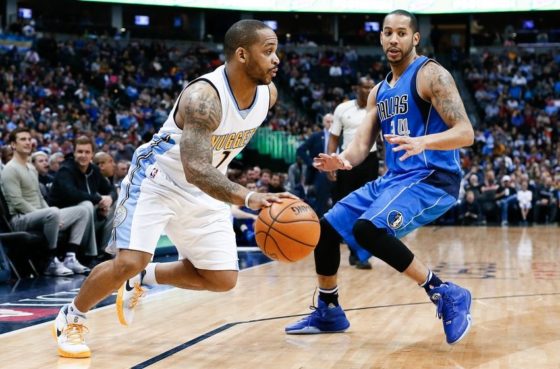 At the age of 34, and coming off of an injury plagued year that limited Jameer Nelson to just 39 games, a dip in Nelson’s overall rating is to be expected. The Nuggets now have a gluttony of guards thanks to the draft, so Jameer may see his playing time reduced this upcoming season, even if fully healthy. Nelson went to the NBA Finals with the Orlando Magic in 2009 and his experience and leadership is invaluable in helping the younger members of the Nuggets develop. Unfortunately, 2K ratings don’t take that into consideration when deliberating overall rankings, hence the slight drop off for Jameer. 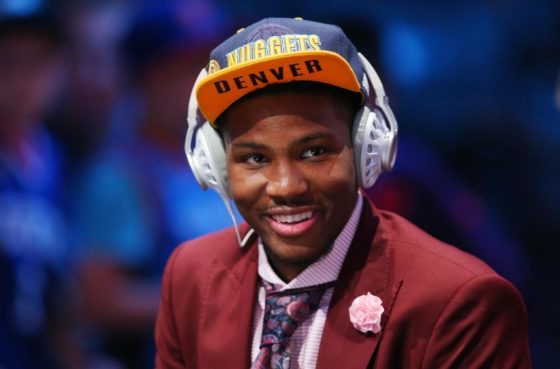 Many predicted Malik Beasley to be a lottery pick in the 2016 NBA draft before a stress fracture in his right leg frightened potential suitors. The Nuggets took the sharpshooting guard out of Florida State with the 19th overall selection. Denver is being cautious with Beasley as he sat out the entire NBA Summer League. He was however, in attendance cheering his new teammates on as well as working out with Nuggets strength trainer, Steve Hess. Beasley may struggle to break into the rotation during his rookie season- hopefully he makes the most of his chances.
He is an important piece moving forward for Denver. 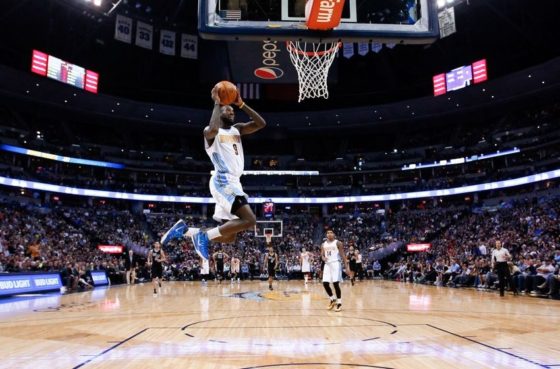 Sampson split time between Philadelphia and Denver last season, averaging 5.2ppg. Like Toupane, the question remains if Sampson will be a part of the roster come opening night, or even a participant during training camp. Sampson is a talented forward and still only 23 years old. Whether or not Juancho Hernangomez will play for Denver next season will play a major part in Sampson’s future in Denver. Wherever he may play his ball next season, Sampson has the potential to become a rotational player in this league.

It’s still uncertain whether or not Juancho will suit up for the Nuggets next season or remain in Europe developing his game for another year. Hernangomez had an impressive week in Las Vegas at NBA Summer League. He was able to crash the offensive boards consistently and showed off his versatility and athleticism. If he were to play in Denver next season, he could potentially be among the biggest movers when it comes to 2K rating. However, he may struggle for playing time with the return of Chandler, in addition to playing behind guys like Faried and Arthur. When Juancho finally does get his NBA opportunity, expect his rating to rocket up well into the 70’s. 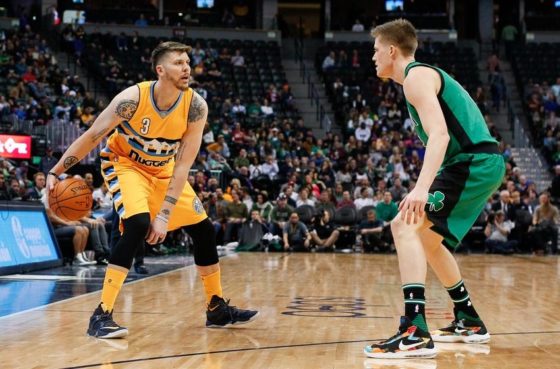 Miller has officially put the pen to the paper, and he will suit up as a Nugget next season! He sat and watched the Nuggets Summer League squad in Las Vegas recently. Mike Miller, the ultimate veteran, has been in the league 17 seasons. While father time has forced him past his prime, Miller can still knock down shots with the best of them. That, combined with his veteran presence, is the reason he remains in the league today. Coming off a solid season in Denver where he was used in special situations, Miller should see no drop off in his overall rating. 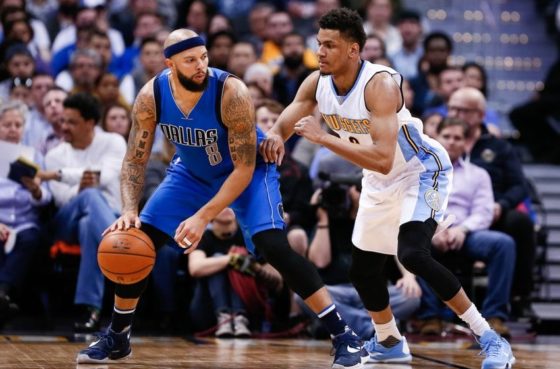 Axel Toupane came to the Nuggets in March of 2016 and averaged 3.6pts in 21 outings. In a game against the Sacramento Kings in April, he had a career-high 14 points. As training camp nears, the question remains as to if Toupane will make the final roster for the upcoming season. Toupane was named the NBA D-League Most Improved Player this past year and featured on the Nuggets Summer League team. At age 23, the Frenchman will continue to improve his game, giving him a small bump in overall rating.

I think this team has potential to be excellent in a couple years, and their overall should be getting better. The combination of big men, shooting, and sport could be good sign though. No matter which way, this team is extremely fun to watch, and they will be extremely interesting to play with.