It is well known that, it was the former NBA star Michael Jordan awarded the cover of the most expensive NBA 2K16 in the last year. This year Bryant’s likeness will grace NBA 2K17 Legend Edition. 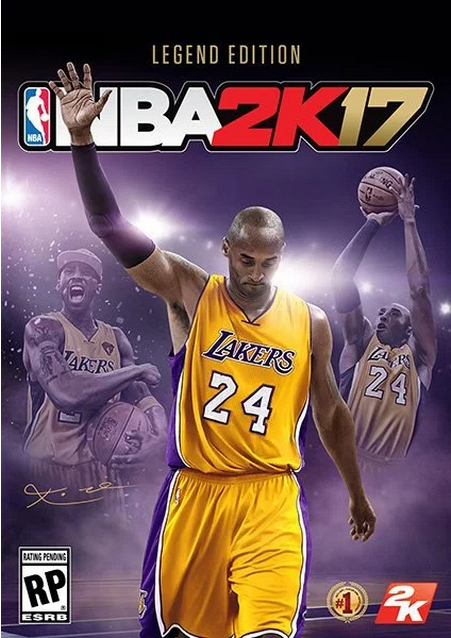 Visual Concepts and 2K Games are honoring Kobe Bryant with his own cover. Doused in the Lakers’ signature purple accent, the cover features him in three different poses. On the left Bryant is celebrating the Lakers winning an NBA championship. On the right there’s a picture of his formidable jump shot. The center of NBA 2K17 Legend Edition’s cover is dominated by Kobe raising his right hand as if to bid farewell to the sport. 2010 was the last time that Kobe Bryant was featured on the cover of a NBA 2K game.

Like the Michael Jordan Edition before it, NBA 2K17 Legend Edition comes stuffed with some physical and digital extras for hardcore fans of the franchise. Items include a limited edition post of Bryant and a Black Mamba controller skin. Buyers also get 2 Panini Kobe trading cards to add to their collectibles stash.

As for digital extras, there’s plenty to be had there too. 30,000 in Virtual Currency is included with NBA 2K17 Legend Edition. A MyTeam Bundle+ includes 3 different backs of MyTeam cards. 2K is guaranteeing that it least one of those packs will include a Free Agent card for Kobe Bryant.

Visual Concepts and 2K Games are also throwing in some digital extras for players to use on their character. They include Kobe’s 2K X1 shoes, #8 Mitchell & Ness Jersey and a hoodie.

NBA 2K17 pre-orders are already available. NBA 2K17 Legend Edition will cost $79.99. It’s only coming to gamers on Microsoft’s Xbox One and Sony’s PS4. The 2K Store is taking pre-orders of NBA 2K17 Legend Edition online. Users can also choose to pre-order a standard copy of the game for consoles other than the Xbox One or PS4. There are versions for Xbox 360 and PS3. Additionally, a version of the game is coming to Windows PCs.

When NBA 2K17 arrives on store shelves in September, it won’t have any competition. Regard it as the necessity of basketball game for fans again this year.