Blizzard has just revealed the revamped human male model, coming in Warlords of Draenor. Like previous reveals, the new model’s increased fidelity is immediately obvious. The work done on his facial structure will be appreciated, too — though he does bear a striking resemblance to Tarzan.In the reveal, Art Director Chris Robinson also mentions that select work-in-progress models will be hitting the Warlords of Draenor alpha in the near future. The final versions of those models will be revealed on the website. 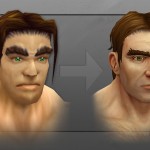 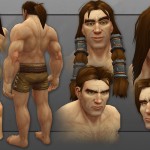