Not long ago, in Path of Exile, GGG revealed one of the five new trap skills they’re adding alongside the Incursion league. Now another new trap skills: Seismic Traps is sure to make your foes quake in their boots.

Available from level 28, Seismic Trap is a powerhouse of Physical damage, with enormous area coverage.

Once it triggers, Seismic Trap produces a mechanical stomper which strikes the ground, sending little quake bursts in five directions. Each direction is picked to favour enemies near it, but you’re pretty unlikely to have any naturally overlap. That’s OK though, because the stomper keeps sending these bursts out for the skill’s entire duration.

The bursts function similarly to Glacial Cascade – they’re a series of damaging circles that appear in sequence, in a straight line. The final burst in the line is larger than the rest.

Unlike poe currency purchase, there are a few ways to scale Seismic Trap’s damage:

Since Seismic Trap deals Physical Damage, it is compatible with all the various damage conversion types and associated ailments. It’s a spell, however, so it can’t inflict bleeding.

With enough Area of Effect the bursts can overlap, allowing you to hit multiple times with each stomp of the trap.

Seismic Trap has a cooldown, so while it’s possible to maintain permanent trap uptime for longer fights, it requires careful management. It’s made a lot easier by increasing the skill duration and lowering its cooldown.

This is what makes Seismic Trap particularly awesome. As you increase your cast speed, the mechanical stomper’s stomp-rate increases. An unsupported Seismic Trap gem will stomp the ground every 0.9 seconds, but that delay is cut in half for every 100% increased Cast Speed.

Do you guys think all trap builds will be similar enough that I could work on something like this as a starter build and then move on to a better trap if one is found?

Playing Aila’s RF build helped me understand why he’s so fast now, though I think the leveling is really weak and could be improved heavily. Unfortuantely I have my doubts that the build will be viable in 3.3 due to Vaal Discipline changes and possible EE changes that they’ve hinted towards wanting to do. If it is possible, Ignite changes might bring some better leveling methods. But I really do not recommend this build unless your goal is to push for 100 as fast as possible in a SSF setting.

The main things that I could improve on:
1. Early game could have been better.

2. I forgot to check Zana for maps immediately after Kitava and accidentally leveled her from a daily as well, resulting in 2 missed map restocks in the first 24 hours. This can result in a massive time loss unless you get super lucky with map drops. Buying maps off Zana is essential for jumpstarting your atlas progression and getting high bonus fast.

3. I should have used all my ancient orbs hunting for Bisco’s Leash as soon as possible. This boosted my clearspeed more than anything else that was reasonable to get.

4. I should have given up on the 6 link way earlier. I used over 3445 fuses without getting a 6 link, which is 287 chaos worth of fuses in SSF. This meant I had to chaos my maps which made it really hard to run t14+ as I couldn’t afford zana mods, and also resulted in xp loss. I wanted the 6 link because I needed all the damage I can get for when elder void portals show up. Also should be noted Vorici is not an option as it requires Vorici 7 which takes way too much time due to map backtracking, shitty missions, etc.

5. Not going along with the top left map meta meant that I had to check the zones for mods myself. Poecraft always had the top left maps listed because that’s what people are running. Good example of what I mean here, about 5 minutes after a zone mod reset: http://puu.sh/Am3As/5bf230bffb.png

6. Filter. Aila’s filters are super fine tuned for what he does, and that helps a lot. And honestly, I actually think him having less stash tabs is really useful for him due to being forced to stay organized. I was surviving on like 6-7 stash tabs but even then, I was keeping a lot of stuff that I simply didn’t need. Towards the end I just started dumping things in a quad tab and gained the discipline to not loot things that I wouldn’t eventually need, but you’ll see a lot of the stuff I got because of potential to reroll + sparrog finished first 100 so I slowed down.

For more poe tips and tricks, stay tuned to U4GM. You can choose www.u4gm.com where you can poe buy currency cheap.

In Path of Exile, do you felt like this flashback event would be a great time to try ssf for the first time? As an experienced player already play ssf, I have some tips and goals for starting out:

1. Don’t hesitate to use more strict filters after a day or two.

The chance to find upgrades on rare slots dimishes really fast and the time picking up all the mediocre bases is better spent farming more. Especially if you eventually want to wear specific uniques or elder/shaper bases in most slots.

2. Make sure you know how to approach your atlas.

Do you want to run purely shaped maps? If so, you might want to use the 3:1 vendor on your shaped maps to aquire the next Shaper’s Orb etc until you have all that you need and then set up an elder ring with the most important ones, doing one on the left side of the atlas is comparably easy and fast, including stuff like underground sea, armoury, toxic sewers etc. and more then pays off in the long run.

3. Don’t hesitate to reroll if you find some strong build enabling items.

Releveling doesn’t take too long and some builds can more then make up for the time spent if you get decent gear for them.

4. Use your poe currency purchase, but use it wisely.

You don’t want to use all your alts, chaos etc all the time but on the bases that you really need upgrades on right now or at a specific point. E.g. if you know that you will need a high pDPS 1hand or a CoH shaper ring at some point then keep things like alts for those. Same goes for essences.

Either way, all you need is curiosity and a love of arpg’s. I would suggest getting a little experience under your belt before reading everything first. Having practical experience will help you have a better understanding of the context within which all other advice will be given. 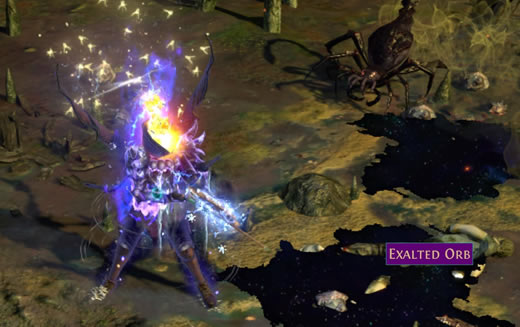 If you want to ignore that advice, get Neversink’s loot filter and install it. Pick a class archetype you usually enjoy and do a search for class builds for patch 3.2. Then just play and follow the build. Searching for things like “starter” build or “cheap” build will help as a new player.

For beginner’s research, watch all of Engineering Eternity’s beginner videos. He has a long and really well produced series for newcomers.

To start theorycrafting your builds, use Path of Building or PoB, though it’ll make more sense when you have a character to import and mess around with.

Use the following sites:

Also, a easy way for you to gain poe orbs fast is to poe orbs buy on U4GM. If you want to buy cheapest orbs, just make sure to spare some time to join in our site.