Throughout the course of NBA history, we have seen some staggering players use their size to devastating effect, and it seems impossible to defend against them at certain times. So, who are the tallest players in NBA 2K21?

Here are the tallest players in NBA 2K21.

The recently graduated UCF center showcased his talents during last year’s March Madness match up against Zion Williamson’s Duke Blue Devils. Tacko Fall is listed at a staggering 7’5″, the tallest player in the modern NBA.

After the 23-year-old Senegal native was surprisingly not drafted by any team during this year’s draft, Fall landed on the Celtics’ Summer League roster and started turning heads for all the right reasons. With the NBA holding an average height of 6-foot-7 (201cm), Fall clearly stands out as a glaring exception. He took advantage of the opportunity and ended up averaging respectable numbers of 7.2 points on 77.3 percent shooting, 4.0 rebounds, and 1.4 blocked shots in 12.6 minutes per game.

NBA 2K21 players can benefit from Fall’s in-game abilities, as his 85 standing dunk, 82 defensive rebounds, and 80 blocks make him an above-average interior player at both ends of the court. Additionally, his 80 overall durabilities will allow you to let Fall bang around inside. You can spend a few NBA 2K21 MT coins and use them in MyTeam while enjoying low price, fast and excellent service.

Carrying a 7-foot-4 and 290-pound frame, Boban Marjanovic scored a career-best 8.2 points per game across the 22 matchups he played for the Sixers.

Boban is so massive that he doesn’t even have to jump much to dunk the ball, if at all, and his large hands mean he can be a go-to scorer in the post as well. Boban is a productive role player, and there is currently no other player at his height in the NBA. He is somewhat of a veteran in the league, coming over from Serbia in his late 20s and proving himself to be an extremely efficient backup center.

Kristaps Porzingis is a multi-talented player with both length and shooting touch. Dubbed “The Unicorn,” he has risen to become one of the NBA’s best PF since his surprising draft, which saw the Knicks take him fourth.

Porzingis has played 261 games throughout his career, averaging 18.6 PPG and 7.7 RPG so far. His ability to shoot from the outside and still play like a big man is his key trait, and he had already made an All-Star Team in 2018. Porzingis may stand 7’3″, but he is not the tallest player in the NBA.

As one of the league’s elite interior youngsters, Kristaps’ 98 offensive consistency, 98 shot IQ, and 98 hands attributes are not exaggerated in the slightest. His 90 standing dunk and 83 three-point shot show that he may be one of the more problematic players to guard at all court ranges.

Kristaps Porzingis has currently found shelter with the Dallas Mavericks, where he’s expected to team up with rookie sensation Luka Doncic and lead the franchise to its long-lost glory once again.

Luke Kornet was picked up by the New York Knicks for the Summer League in 2017 after going undrafted and soon signed a two-way contract with the franchise. He debuted the Knicks against the Toronto Raptors and finished with 11 points and 10 rebounds in 22 minutes and became only the second Knicks rookie to finish with a double-double debut. He also recorded four blocks which made him the only player in NBA history to sink three three-pointers and record four blocks in the same game.

He soon signed with the Chicago Bulls as a free agent. Despite not being a regular in the starting lineup, Kornet has impressed the Chicago faithful whenever given an opportunity.

While his best attributes of 90 intangibles, 98 shot IQ, and 85 hands don’t describe the full picture of what Kornet brings to NBA 2K21, adding in his 83 free throws, 70 three-point shot, and 77 close range showcases that he’s a three-level threat.

Despite being one of the more hyped prospects in the NBA draft, Bol Bol slipped below only to be picked 44th. He can dribble, pass the ball, and shoot three-pointers at a relatively more efficient rate than other players his size in his defense. Hindered by injuries, he got to play just nine games at the University of Oregon, where he averaged an impressive 21 points, 9.6 rebounds, and 2.7 blocks per game. This caused Bol Bol to drop all the way into the second round all while trending worldwide, eventually picked by the Denver Nuggets.

Bol Bol has shown flashes of talent in the short amounts of time he has been on the court, but he has a long way to go to earn his coach’s trust. Bol Bol is only averaging 8.0 MPG through his first 2 seasons in the NBA, and despite nailing 44.4% of his threes third season, he has not been able to break through just yet. Still, Bol is the best player in the NBA at 7’2″, and he is only 21 years of age.

This up-and-coming player shows some youthful potential with his 86 block, 80 stamina, and 85 intangibles and shows potential at several scoring levels, as shown by his 78 close shots, 79 mid-range, and 77 three-point shots. After passing the rock to Bol Bol, feel free to exploit defenses all over the court, especially as the Sudanese center moves closer to his 83 potential ratings.

Boasting tremendous size, these players will help you find success with their height, wingspan, and ability to see over the opposition. Could you hurry up and try them in MyTEAM? Also, to see more lists of outstanding players, including small forward, power forward, point guard, center, etc., please click here.

Previously two decades, sweat design is now the core with the improvement and status of NBA 2K21 MT. Sweat is often misplaced thanks to the chaos and beauty of NBA games. This is certainly difficult to see and it is one among the least interesting elements on any offered stage. It really is counterproductive since you are afraid of silence. Why does a simulation intended to provide you with quite possibly the most reasonable basketball expertise in the form of graphical representation in NBA 2K21 MT look to get the franchise's emphasis?

NBA 2K21 MT won't emphasis on sweat. This is certainly something that stands out considering that the gamers seem extra authentic. If you include smaller facts like this, although you do not intend to emphasize sweat specifically, not less than regarding 2k trailer trailers, It is tricky not to emphasis on an endeavor. Whenever a brand new generation of game consoles is prepared to launch, digital sweat is inevitable.

Final June. Sony's occasion to introduce their next-generation console, PS5, showed a series of games, together with an hour-long occasion, the first announcement trailer for NBA 2K21 MT. “You are not prepared for this,” Zion Williamson warned, and he only installed an Airpod on the display, and it grew to become a reality. Lower into black. Williamson may be noticed in the empty stadium, the place the sole light supply originates from the sun; more than likely he was functioning while in Jimmy Butler's time. 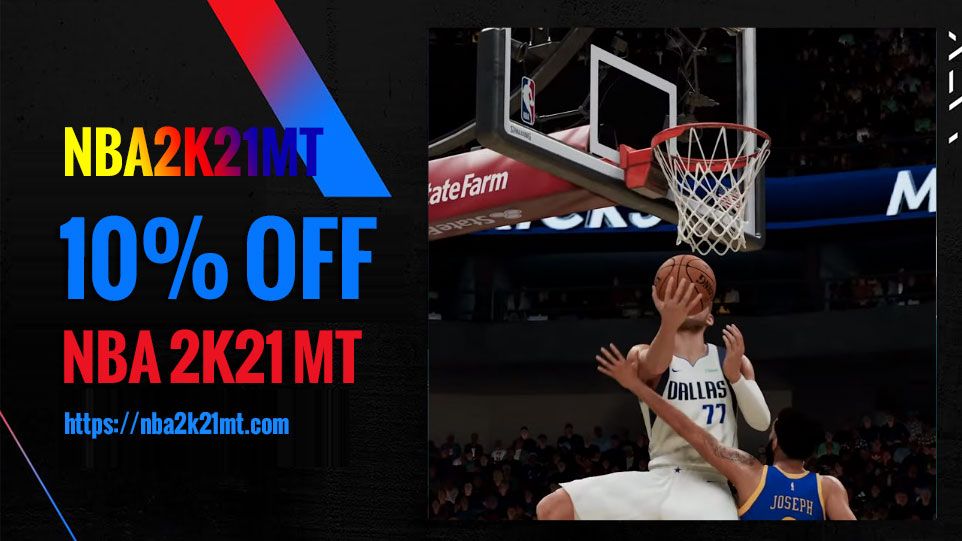 It appears all-natural, but the Playstation 5 lens with the subsequent get the job done in the NBA 2K21 MT series. The 1st close-up shot is Williamson's upper entire body. There was sweat on his shoulders and neck. Piercing the trailer can be described as close-up of Zion's face, each inch of his forehead moistened. All round, the image is quite beautiful-lighting, shadows, skin texture, and shade depth look to possess been enhanced. Having said that, what dominates is how sweaty anything appears.

Why has sweat develop into the central characteristic of NBA 2k's aesthetics and qualities?
As 2k gets extra dynamic, modifications may be finest captured by means of digital work. Chase Becotte of Operation Sports reiterated this thought in an e mail: “I consider the way in which sweat is used-especially on the starting with the new generation-really tends to aid highlight the leap in graphics This Website. From time to time, it feels like developers have a yr or two. Will back down a little later on considering that it appears slightly stupid, however it quite often does have a purpose to start with.”

Brody responded to this statement: “The graphics abilities with the upcoming generation of consoles let us to improve all kinds of seemingly smaller facts, all of which include new realism to our games. This is not just sweat, and It is also about paying out focus towards the facts of NBA players' skins, eye movements, and even more issues connected to them, permitting you to stand up on the court with them.”

It really is problematic to suit your needs to discover a random NBA 2K21 MT fan for such a straightforward and straightforward concept. His authentic intention to the sweat of this series is only a hassle-free approach to show the progress of generations. Basically as if classes had been dismissed thanks to an unscheduled fire drill, introducing the next generation of games by means of eye-popping trailers broke the monotony of expectations for video game followers, especially in the sports activities sector: Anticipate the annual title release, decide to purchase it Then complain.

When applied towards the video game expertise, the sense of nostalgia is going to be stronger, especially for series which have existed lengthy adequate to divide their history into 2k or the like. “I'm continually cautious when contemplating game discussions and their modifications involving various eras. Because I was twelve years previous, I've participated in sports activities game forums, and then I went to Reddit, and so forth. People have continually had quite a lot of detrimental opinions. There's extra positive views.

In retrospect, it truly is difficult to picture the all-natural feeling of 2k from 5 to six years ago, allow alone 10 years ago. For each transform and improvement connected towards the game expertise, considerable changes are already produced to other much less important factors. Brody summed up this point really well: “NBA 2K21 MT is now a way of life. This ecosystem can not only meet the consumption and enjoyment requires of NBA basketball but also provide you with a platform for expression and discovery… to produce a way to reflect Real-world sports activities games go far past fundamental game elements.”

The prominence of 2k like a big basketball game goes far past a rough comparison involving units sold. On top of that to delivering high-quality basketball simulation, it also immerses gamers in the separate planet. This planet has its economy, which is, relying on NBA 2K MT, the currency is utilised to upgrade the player's attributes and might be achieved by means of precisely the same degree of commitment expected for part-time get the job done or by means of purchases with authentic hard earned cash. Idris Elba, Rosario Dawson, and Thomas Middleditch talk for you in the 2k story mode MyCareer. With all the joint efforts with the NBA, 2k has established its e-sports league with 23 teams and sometimes broadcasts games on ESPN. The gamers themselves are followers with the series and actively participate in the cultural discussions surrounding each and every new release. Damian Lillard premiered two of his songs on the NBA 2K21 MT music score under his rap alias Dame DOLLA.