Have you ever had the quest dialog from an NPC move around while you’re trying to read it? Have other UI elements covered part of the dialog bubbles? Would you rather just have one window that opens with all the quest text and options? Well then ClassicQuestDialog(CQD) is your addon! 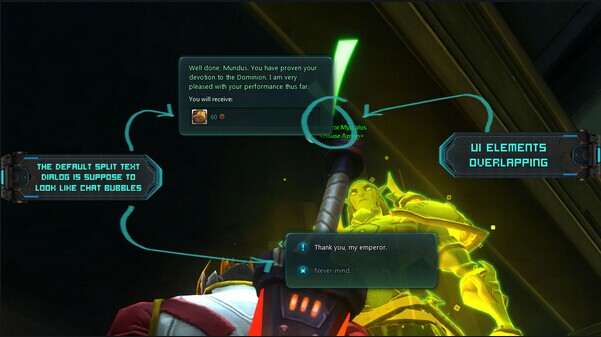 The image above shows the default quest dialog UI. It’s supposed to be more of a conversation so the quest text is broken up into windows that are supposed to be like chat bubbles. While the idea is great, the execution leaves something to be desired. Thank god DurvegTL released CQD! As you can see below, CQD takes all the quest dialog and centralizes them into one window, giving it that classic MMO quest dialog look. 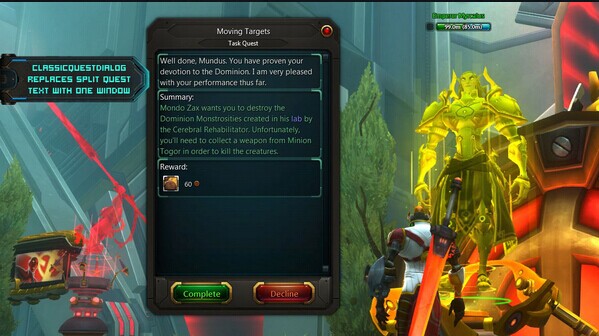 The text is even a bit larger making it easier to read, but if you’d like to make it smaller you can, thanks to a plethora of options in the options menu. And you’ll find that options menu by hitting the escape key and looking in the menu pane on the left, you should see an option for ClassicQuestDialog. There’s three tabs to the settings panel and they’re pretty self expanatory. Font Size allows you to change the size of the font, Keybinds let’s you change the keybinds for accepting and declining quests as well as scroll up and scroll down for long quest text windows and finally, the General tab houses the remaining toggles.

As you can see in the image above, those toggles can turn the keybindings on or off as well as some nifty automation, like always opening the first quest from an NPC and saving the location of the window when you exit the game.

I can understand that Carbine would like to innovate on the way quests are shown, getting away from the static windows where most people just hit accept and run off to do the quest without reading a line of dialog. They want it to seem more natural with simulated chat bubbles and really it’s not bad by any means, but if you’d rather have the tried and true quest text box, ClassicQuestDialog is just for you!